In appreciation of Alexander Brown 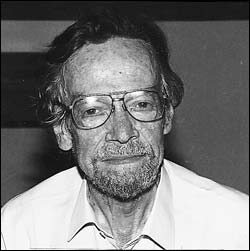 It is with great sadness that we report the death of Professor Alec Brown on March 9, 2005, after a long illness. Alec will be remembered with respect and affection by all who knew him. He was a member of the Department of Zoology from 1957 until his retirement in 1996, and was head of department for two periods during that time.

Alec was a distinguished, internationally-recognised scientist, whose pioneering works established sandy-beach ecology as a discipline. In particular, the plough snail Bullia will forever be inextricably associated with Alec, and many of his over 200 publications deal with this creature.

His life's work was condensed in a book on the ecology of sandy beaches, which he co-authored with Anton McLachlan. This achieved such international prestige that it was translated and published in Japanese.

Many postgraduate students passed through his caring hands and his teaching skills were legendary. For this, he was one of the first recipients of the Distinguished Teacher Award. He inspired generations of students with his flair as a lecturer and his example transformed teaching skills in the department.

Alec also tirelessly promoted science, serving six distinguished societies as editor, treasurer, council member or president. Fellowships from the Royal Society of South Africa and UCT, the Gilchrist Gold Medal for exceptional contributions to marine science, and the Gold Medal of the Zoological Society of Southern Africa are all fitting recognition of his devotion to science.

Multi-talented, Alec also had a passion for music, conducted his own orchestra, composed a national award-winning symphony, and had the extraordinary distinction of simultaneously holding the deanship of music and the headship of zoology. Modest and compassionate, Alec inspired and powerfully shaped the professional conduct of his compatriots.

He was deeply loyal to the department and to UCT and he went to great lengths to put colleagues and students forward for promotions and awards. Perhaps his greatest legacy is the happy and caring atmosphere that pervades the department he headed. Like the sea he so loved, a wave of sympathy extends to his family as a measure of the special place he occupied in the hearts of his companions, friends and students.