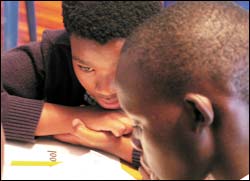 Heads down: Competitors in the Minquiz competition, Jameson Hall.

Sasol will spend about R150-billion on new developments in the future, and billions of rands worth of investment is expected to boost South Africa's industrial and mining sectors over the next years, Professor Cyril O'Connor told pupils competing in the annual Minquiz Competition.

"If you wondered why you should study engineering, we need wealth creators and they are the engineers," the Dean of Engineering and the Built Environment said during his welcome in the Jameson Hall, where teams from 25 schools had gathered to pit their skills.

There were some tense moments during the competition as SACS and Rondebosch jockeyed for second place, the team from Diocesan College (Bishops) taking top honours.

Competing in the Platinum category, Bishops was ahead all the way and took the trophy. The schools ranged from top private institutions to local township schools. The newly-established Cape Academy entered a team for the first time.

In the Gold category, the competition was as stiff, the winners all within a point of each other. The John Wycliffe Christian School was first, Cape Academy a close second and Belgravia High School third.

Schools enter teams of three, which undergo a preliminary written quiz, whittling down the numbers to a handful that compete on-stage in a final oral quiz. The content of the multiple-choice questions is approximately 25% each of chemistry, physics, maths and general knowledge.

The Minquiz aims to encourage interest and careers in science, engineering and technology. The national final will be held at Mintek in Randburg on May 12, 2005.

Alex Larkin, science teacher at the John Wycliffe Christian School, was delighted to hear that two of his team, Michael Keegan and Carmen Siegelaar, will be making the trip to Johannesburg.

"Thank you for all your work in organising the day," he wrote. "We really enjoyed it."