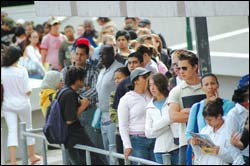 On March 8, a meeting was held between representatives of the Student Representative Council (SRC); members of the UCT transport office; representatives of the shuttle service provider (Sibanye); the consultants; the executive director of the Student Development and Services Department, Moonira Khan; executive director: properties and services, John Critien, and the Deputy Vice-Chancellor, Professor Thandabantu Nhlapo. The aim of the meeting was to plot a way forward on the problems experienced with the shuttle service in these early days of the campus transportation plan and other issues that had led to the mass meeting of

The SRC, represented by president Nqobizitha Mlilo and accompanied by the secretary-general, Yershen Pillay, presented a list of concerns that echoed the list included in the petition handed to the university after last week's mass meeting. The issues of concern included:

After a long discussion during which these issues were thoroughly aired, the meeting noted the following:

The meeting then resolved that the university should write a letter to the students explaining the matters alluded to above, and seeking the extension by seven days of the deadline contained in the petition (which was March 9). The new deadline would thus be March 16. Further conditions were that the letter should be presented to the SRC for approval before publication. And finally, the letter had to specify the university's commitment to an improvement in the shuttle service within the seven days of the extended deadline, and that this should be monitored in a manner agreed to by all the parties. As to the latter point, it was agreed that a small group, including SRC representation, would meet under the convenorship of Geoff de Wet to finalise an agreed monitoring mechanism.

The university accordingly proposes that it be granted until Wednesday, March 16, to improve those aspects of the shuttle service that are of immediate importance, under a supervision system to be devised by the working group, which includes the SRC. The immediate improvements to be made are: