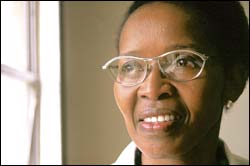 The Faculty of Humanities in collaboration with the Unilever Ethics Centre at the University of KwaZulu-Natal will host an event titled South Africa: The Unfinished Story on April 6 at 17h00 in the Graduate School for Humanities building, upper campus.

This is the first in a series of innovative discussions to stimulate public dialogue about issues affecting different sectors of South African society, and to find ways of moving the reconciliation agenda forward.

The organisers are Pumla Gobodo-Madikizela (above), associate professor of psychology at UCT and winner of the 2004 Alan Paton Award for non-fiction, in collaboration with Associate Professor Chris van der Merwe, Afrikaans and Nederlands, at UCT's School of Languages.

A select panel will lead discussion on amnesty and the question of presidential pardon; the story of the "disappeared" in South Africa; as well as the life of former conscripts of the South African Defence Force and former combatants in the liberation forces. Panellists include: Yasmin Sooka, director of the Foundation for Human Rights in South Africa; Dr Alex Boraine, founding president of the International Centre for Transitional Justice; Antjie Krog, multiple prize-winning writer and poet; Jonathan Shapiro ("Zapiro"), who was the first cartoonist to win a category prize in the CNN African Journalist of the Year Award; and Thembi Simelane, whose sister's story of "disappearance" was told to the Truth and Reconciliation Commission.

Please note that the two-day stress management workshop advertised in Monday Paper last week for March 8 and 14 will take place on April 4 and 11. This programme, run by the Staff Learning Centre, has been designed to help staffers become aware of the role of stress in their lives, help them identify their optimum stress levels and provide them with the tools to manage their stress effectively. Follow the links from the HR development page for more information.

Celebrating the heroic age of exploration, the physics department will host the showing of a DVD, based on the Imax film of Sir Ernest Shackleton's Antarctic expedition of 1914 to 1917. This includes original photographs taken by Australian Frank Hurley. Last year marked the 90th anniversary of the start of the expedition.

Based on Hurley's original prints, an Imax production was made five years ago but has never been shown in South Africa.

Unique Destinations, a company specialising in polar voyages, has procured the DVD based on the Imax film and will share it with the UCT community, with the particular intent of showing it in the venue which carries the name of one of the expeditioners, RW James.

The DVD will be shown on Tuesday, April 12, at 19h30 in Lecture Theatre A of the RW James Building. The event will be presented by Unique Destinations. Company director, Hans van Heukelum, explains: "Shackleton's trans-Antarctic expedition was one of the great feats of human perseverance - one very vividly captured in the powerful and dramatic pictures taken by Frank Hurley, the expedition's official photographer, under the most adverse circumstances imaginable."

Golden Key Honour Society has developed a new project, one in which students assist people find employment by sorting out the first step in the process: the acquisition of a professional and complete CV. All that is required of students is minimal typing skills and a little time. Towards the end of 2004, the CV team visited a homeless shelter in lower Observatory and realised that there was a great need to help in this area, something students are particularly equipped to do. The typed CVs were delivered to the shelter a few days later. Golden Key plans to continue with this project throughout the year, visiting a broad spectrum of shelters and other such institutions that may benefit from its services. If you know of any such institution or if you are interested in helping out in one of the CV workshops, please contact the Golden Key community service team by e-mailing hrcdan001@mail.uct.ac.za to get involved in this rewarding and fulfilling experience. 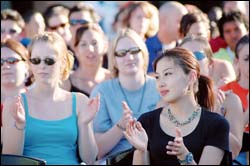 The International Academic Programmes Office (Iapo) recently welcomed the many international study-abroad students who will call UCT home for the first semester. While scores of countries are represented, about 80% of the group hails from the United States. And they came for all kinds of reasons. "Cape Town is a highly complex city in a highly complex time for South Africa," said Jessica Maxwell of Reseda in California. "I just wanted to understand that transition."