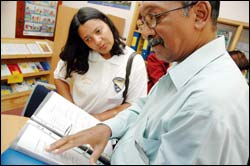 Closing the gap: Ruwayda Isaacs, librarian at Steenberg High School, and UCT recruitment officer Iegsaan Isaacs at the launch of the resource centre at Retreat Library.

That's the line the student recruitment section of the Admissions Office took recently when it launched a resource centre at the Retreat Public Library, fitting out a room with a selection of resources on higher learning in South Africa. The department did this, says Carl Herman, director of the Admissions Office, to plug the information gap among prospective students.

"What we're discovering increasingly from year to year is that there is an uncomfortably large number of applicants who are applying to UCT, but unfortunately they do so on the back of insufficient information," says Herman. "That has a negative impact on throughput."

UCT, of course, runs a full-blown Resources Centre, but has found that many students, especially those from their poorer areas around Cape Town, have trouble getting to the university. Thus the outreach to Retreat, which boasts a couple of high schools in the surrounding suburb.

The collection on display in the library includes a full suite of booklets and pamphlets on UCT courses - similar publications on other Western Cape institutions will follow - and general texts on careers, as well two PCs replete with PaceCareers self-assessment software. In addition, staff members will regularly update the publications, and also will be available to talk to parents and students at the library once a month.

"We're going to have a presence here," Naomi Claassen, the student recruitment officer who first floated the idea, promised principals and teachers at the launch.

If the project does well in Retreat, similar initiatives will be launched in other Western Cape neighbourhoods.