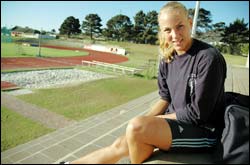 It didn't take first-year physiotherapy student Odette Olivier long to get her name in the UCT record books. On February 19, before she even set foot in a UCT lecture hall, the 18-year-old from Victoria West in the Karoo district set a new UCT women's (junior and senior) javelin record with a throw of 40.78m. That beat Futi Martin's previous record of 29.50, set in February 1993, by some margin.

And Olivier, who earned Boland colours in the code while at school, is not done just yet.

At the WP Master's meet on February 26, she managed a personal-best distance (albeit unofficial) of 42m during her first "training session" with new coach Frans du Toit of the Bell-ville Athletics Club, who has agreed to take her under his wing. Olivier wants to go beyond the 45m mark before the end of the season. That, she says, will decide if she sticks to the sport or commits herself to her other love, hockey, in which she has also represented Boland. UCT coach James Evans will be holding thumbs she breaks the 45m barrier and stays with the track-and-field event.

"She's the first genuine javelin thrower we've had in . . . 112 years," he says. He may be joking about the century-long lag, but not about the young new talent on the block.