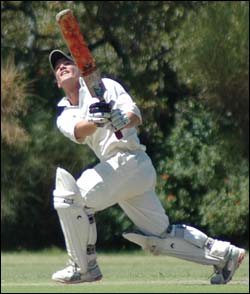 A day after yet another dismal defeat in the two-day club competition - by seven wickets to Pinelands - the UCT first team lifted its game to beat Claremont in the semi-final of the one-day tournament. UCT batted first but started sluggishly. A late scamper for runs saw the team to a very health 260/7, though. Martin Walters top-scored with 66, and John Geoghegan contributed 49. Claremont put up a good chase, but was bowled out for 230, with Geoghegan and Tanner Rock taking three wickets each. UCT will now play in the finale of the competition, a day-night match scheduled for Friday, March 11, at Newlands.

Brace yourselves for Two Oceans

Thousands of runners will again flock to UCT on Saturday, March 26, to take part in the Old Mutual Two Oceans Marathon (and half-marathon, of course). As is wont in the days leading up to the main event, the UCT sports centre will be converted into an exhibition hall, and the rugby fields dotted with tents and the like. That means more traffic as thousands stream onto upper campus to register for the races from Wednesday, March 23, onwards (there's also a festival on the Friday). Luckily, Two Oceans takes place in the week of the mid-term vacation, which should ease the parking burden.

The run of the vine

Once UCT staff and students are done with the Two Oceans races, they could well consider signing up for the second only 14km JC Le Roux Devon Valley Run, a canter through the finest vineyards and wine cellars of the Devon Valley, on Saturday, April 2. Dress-of-the-day is outrageous, so leave those moisture-wicking vests at home. The event is limited to 2 500 runners/walkers. Entry forms are available at sports stores and wine outlets, or enter online at www.jcleroux.co.za at R130 per person. For more information, visit www.jcleroux.co.za or contact Top Events at telephone or e-mail info@topevents.co.za.