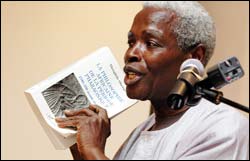 UCT played host last week to Ayi Kwei Armah, the celebrated Ghanaian novelist, scholar, critic, university professor, poet and translator. Armah delivered the first in a series of lectures on the issue of African identity and the world, presented under the banner of the Human Sciences Research Council of South Africa (HSRC).

In his talk, Armah spoke on the history of African philosophy, as well as its strained relationship to the works of vaunted western philosophers like Aristotle, whose texts have long been used, said Armah, to "indoctrinate" Africans.