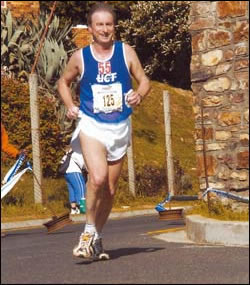 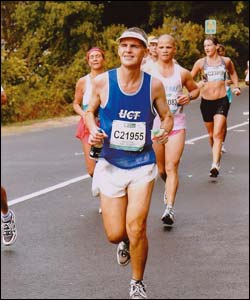 Two years ago Rochford, a lecturer in the School of Education and then 57, already owned a raft of the club's Tarmac Awards. This prized memento, essentially a slab of tarmac with a plaque slapped on, is handed to the runner in the club who from mid-September of one year to mid-September of the next clocks the most kilometres.

Rochford bagged his umpteenth award when, over the 12 months stretching from 2001 to 2002, he sent the record books into a spin by amassing not counting a triathlon he completed over the period. It was the first time in the club's history anyone had gone over

Rochford, always modest, took the record in his stride. "I just did it for fun," he says. Everyone else was astounded. "It was thought that the record would last forever," says club coach James Evans.

It managed two years. Recently Okreglicki, 44, a cardiac specialist at Groote Schuur Hospital - he's but one of an elite group of cardio-electro specialists in the country - became the first in the club to break the barrier. He completed a whopping over the prescribed 12 months, a chase that included 12 half-marathons, eight marathons and seven ultra-marathons. Among the seven featured the Cape Town 100-Miler, the 87km Comrades, the Washie 100-Miler, and the 80km Puffer.

Okreglicki had not initially targeted the mark. It was only after he had completed the Washie in July and realised that he still had the Puffer coming up - only a limited field is accepted - that he entertained the notion. "I worked out that, hey, I could even manage a miles," he says.

It was a close call in the end. He had to run the Riebeeck Kasteel Half-Marathon on September 11 and the Puma Peninsula Marathon the next day to make sure he finished before the mid-September cut-off.

He's now looking for new challenges. Like an Ironman race - think a 3.8km swim and a 180km cycle rounded off with a full marathon - or even an Augrabies Extreme Marathon, a 250km race over seven days, which he did in October.

Neither Rochford nor Okreglicki are done rewriting the books just yet. Rochford, having turned 60 in early November, is now in the Grand Master category where there are a couple of records he'd like to break. "I'm going to try and nail them all down," he laughs.

And Okreglicki promises to keep running for as long as he can (he's inspired his 76-year-old mother to take her tackies out of mothballs). Should he still be around he may even have a go, he promises, at centenarian Philip "Flying Phil" Rabinowitz's Guinness Book of World Records entry of 30.86 seconds for the 100m.

He'll be the envy of octogenarians everywhere.