Turning things around in communities 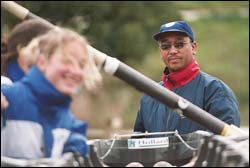 Planning ahead: Keith Hart and other staff members and students are doing their bit to give South African sport a leg up.

These sporting greats feature prominently in the roll call of UCT graduates and alumni who earned their sporting stripes here before becoming household names. Add to these the likes of national cricket captain Graeme Smith, who had designs on a UCT degree before his cricket career went stellar, and the gallery of elite athletes - including three graduates, one registered student and a couple of coaches - who took part in the Athens Olympics this year, and it's clear that UCT has and continues to mould many talents.

But the university contributes on other levels as well. When student sporting bodies decided in the early 1990s that the time had come to join forces, it was UCT that hosted the watershed conference - chaired by sports director John Donald - that prompted the birth of the unifying South African Student Sports Union (Sassu).

Somewhere between burning the midnight academic oil and training and competing in their various sporting codes, UCT students are also doing their bit for sports development. So, for example, this year's winners of the Transformation Trophy in sport went to Margot Scheffer and JJ de Castro Maia for their sterling work at the Shawco centre in Manenberg (see separate story). The volleyball club, the 2004 sports club of the year, not only turned its own flagging fortunes around, but also coached a Hout Bay development team - made up of school kids and youth who would otherwise just be loafing around - to some very impressive results in recent contests, including a runners-up spot at a schools' tournament hosted by Herschel Secondary a few weeks back. The UCT squash club has, on behalf of Western Province Squash, hosted a weekly tournament for children from surrounding townships, with Siyoli Lusaseni - ranked as one of the country's finest woman players - and others taking time out from their hectic schedules to coach the youngsters. The rugby club has been another leading light in this regard, this year setting up official ties with a number of black senior and school teams, including the Ubumbo Rugby Club that has been absorbed into the university's internal league. And of course sports administrator Keith Hart has in his capacity as transformation and development officer for the Western Province Rowing Association established that body as one of the best in the country, with plans to roll out its organisational model as blueprint to other provinces. Hart also founded and coaches an ace UCT development team of school kids from Grassy Park. Other staff members like Lydia Hall, Roger Adams and Frans Mamabola also serve on national student sporting bodies.

"Because we encourage students to run their sports clubs, we have provided a training ground for leadership in South Africa. Not just in sport, but in management and other areas as well."

So if you don't see them in the arenas in the near future, look out for them in the managers' boxes.