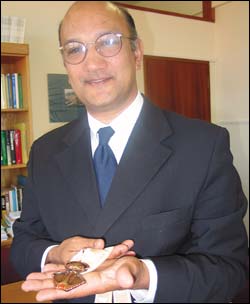 UCT's Dean of Science Professor Daya Reddy has received the Order of Mapungubwe: Bronze, from President Thabo Mbeki at a ceremony held at the Union Buildings on October 29.

The National Orders are the highest awards that a country bestows on its citizens and foreign nationals. The Order of Mapungubwe is one of four new National Orders, which include The Orders of Mendi, Ikhamanga and the Companions of OR Tambo, introduced on Freedom Day on April 27, 2002, to replace those established during the apartheid era.

The National Research Foundation A1-rated scientist was one of 30 recipients of National Orders, the award honouring his "outstanding contribution to and achievements in the fields of mathematics and science". He will be entitled to use the post-nominal letters OMB.

Speaking at the function, Mbeki, who is Grand Patron of National Orders, said the recipients stood out as beacons that would guide the rest of the nation as they built a society founded on freedom, justice and equality.

"To them all, the living and the dead, on this day, the nation says - bayete."

The Order of Mapungubwe (formerly the Order of the Southern Cross) is named after an ancient but sophisticated African kingdom that existed a millennium ago in the northern corner of South Africa and which traded with countries as far afield as China. It has three classes: Platinum, Gold and Bronze.

Appointed Dean of Science in January 1999, he first received an A-rating in 1996. He obtained a BSc degree in civil engineering with first class honours in 1973, and has a PhD in mechanics from Cambridge University (1977). After a postdoctoral year at University College London, he was appointed in 1979 to a jointly held position as lecturer in applied mathematics and civil engineering, a reflection of his multi-disciplinary interests. He was later appointed to a chair in applied mathematics in 1989.

Reddy's teaching, research and professional interests lie at the interface of applied mathematics and engineering. He has written or co-written more than 85 articles, mostly in international academic journals, and is also the author or co-author of three texts or monographs and three edited works. Reddy has supervised the research of 16 MSc and 16 PhD graduates.

An extract from his citation reads: "From humble origins, Professor Reddy has risen to the pinnacle of his profession, extending the boundaries of knowledge from the vantage point of the imperatives of development of his society, at the tip of Africa. His academic work has spanned a wide spectrum, from abstract studies of a highly theoretical nature to resolving fundamental problems of a practical and industrial nature. Professor Reddy is a mathematician for whom any problem represents a challenge to scientific research and application. His achievements redound to the credit of our nation."

Of the awards ceremony at the Union Buildings, Reddy said that being in the company of so many distinguished South Africans and listening to the record of their achievements had been an affirmation of "what we are and what we have become" as a nation.

"You do feel very humble when you read and listen to what others have done."

Reddy was one of three scientists to receive National Orders, including South African-born molecular scientist Professor Sydney Brenner, who shared the Nobel Prize in Physiology or Medicine in 2002, and Professor Tshilidzi Marwala, a young leader in the field of computational intelligence.