The UCT Chancellor's Award for Outstanding Leadership in Africa 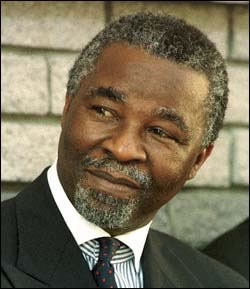 The inauguration of this award during UCT's 175th anniversary is symbolic of UCT's reaffirmation of its commitment to the African continent. The award underscores UCT's vision to be an institution that makes a deep impact on society, and continues to form partnerships that help Africa find effective solutions to its perennial problems of poverty, hunger and disease.

The UCT Chancellor's Award for Outstanding Leadership in Africa will be conferred annually, and recognises in individuals outstanding and lifelong leadership and service to the continent and its peoples. It's a celebration and acknowledgement of citizens of Africa who have shown exceptional leadership and commitment in their respective spheres.

The 2004 award is conferred on President Thabo Mvuyelwa Mbeki for the lifelong pioneering role he has played in the struggle against apartheid and his inspiring example of disciplined study and hard work under challenging circumstances.

He has done South Africa proud in his role as a statesman, winning international respect, yet never shying away from addressing challenging issues around the disparity in trade and other relations between the developed and underdeveloped nations. His achievement as President and national leader is the embodiment of what our nation is capable of. He is acknowledged for his far-sighted vision of an African Renaissance, and for seeing that South Africa's stability is inextricably linked with that of the African continent as a whole. His vision of the New Partnership for Africa's Development (Nepad) and the strategy it is unfolding to create a more mutually beneficial basis for economic interaction between Africa and the developed nations is far-sighted and in service to Africa and all its citizens.

UCT is proud to have President Mbeki as our first recipient, in our 175th year, of the UCT Chancellor's Award for Outstanding Leadership in Africa.