GSB staffer bowls them over in England 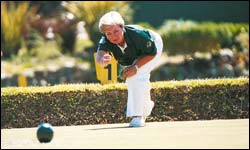 Jacking up her game: Trish Steyn shows the form that helped her and the SA triples team win gold at the Women's World Bowls Championships in England recently.

UCT's Trish Steyn has led the South African women's bowls team to the top of the world.

Steyn, manager of operations and logistics of the Executive MBA programme at the Graduate School of Business when she's not chasing down the jack, and teammates Jill Hackland and Loraine Victor took gold in the triples event at the Women's World Bowls Championships at Royal Leamington Spa in England in mid-September. It is held every four years.

The trio, losing only to Canada midway through the competition, saw off some of the world's best teams at the event, including Fiji, Thailand, Scotland, Namibia, hosts England in the quarter-final, New Zealand in the semi-final and, for top honours, Australia.

Understandably, the South Africans are over the moon with their win. "It's the one we worked hard for, for four years," says Steyn.

The gold-winning clash against Australia, on a drizzly English summer's day, was particularly gratifying for the South African lead player. Up against the hot favourites, Steyn produced her best performance of the competition while the Aussies struggled to come to grips with the wet conditions.

It's the good form Steyn would like to carry through for a while still - she has the South African Master's competition coming up, the Women's Atlantic Rim Games in Ireland in 2005, as well as the African States Bowls Championship, where she is to defend her singles title, in Botswana. She has also been included in the SA squad for the Commonwealth Games in Melbourne, Australia in 2006.

Steyn is not letting her successes on the world's bowling lawns go to her head, though. "I've still got to do the washing up and ironing."