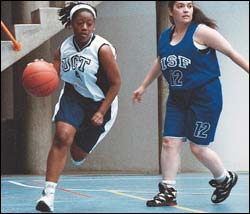 On the ball: UCT captain Slindile 'Slee" Mayeza has led her side to the finals of the Western Cape Basketball Association (WCBA) second division competition.

The women's basketball second team has again proven to be the UCT torchbearers.

Both the women's and men's first teams were knocked out of the Western Cape Basketball Association (WCBA) playoffs on Sunday, September 18, bringing their seasons to a premature end. Only the women's second team - the sole UCT team to finish top of a WCBA log this year - didn't falter at this last but one championship hurdle. They outgunned the International Sports Federation (ISF) team by 47-29 in the sides' second of three semi-final matches, following on a 44-32 win the weekend before.

UCT will now go up against either Whoop Squad or Montana Vikings, still in the throes of their playoffs, in the final of the competition. UCT will have to jack up its game for the three-match final though - Whoop Squad and Vikings are the only two teams to have bested them this year. "It's a nervous time for us," admits captain Slindile "Slee" Mayeza.

The earlier defeats notwithstanding, Mayeza remains upbeat about her side's prospects in the upcoming showdowns. "I think our chances are pretty good," she says. "But it's all going to come down to what happens on the day, whether we play hard or whether we don't."

The finals will be played sometime in early to mid-October.