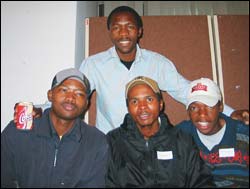 The stories are familiar: young UCT graduates with pluck and savvy who forge their marks on the world and go on to become valued benefactors to their alma maters.

At the Saville Awards evening two weeks ago, participants on the Commerce Academic Development Programme (CADP) hailed one of their own benefactors; UCT alumnus Duncan Saville, a financier and businessman who graduated BCom in 1975 and BCom (Hons)/CTA in 1978.

An experienced international company director, Saville now divides his time between his home is Australia and London. His sponsorship of the evening is part of a R2.5-million commitment to the faculty over five years. The CADP-Saville Project is one of the flagship programmes.

The campaign's success will be founded on people like Saville, those who have remembered to plough back into the institutions that built them, perpetuating a cycle of human capital growth.

For the 300 students on the CADP, all from disadvantaged backgrounds with varying situations of disparity, this growth has already begun. The programme was designed to help them complete a BCom degree in four years by offering a range of academic and life skills interventions. The extended time allows staff to bridge the "articulation gap" between school and university, with the CADP team working diagnostically to address gaps and disparities in students' education.

"It's not only about education," programme coordinator Dr June Pym reminded. "The CADP tackles life skills and life experiences as well as the graduate competencies they need."

Saville's contribution to the CADP is also important for two other reasons: it underwrites the development of a mentorship programme as well as academic internships in the faculty, ensuring the commerce faculty is able to grow its own timber.

As the UCT Academic Development Programme director Associate Professor Ian Scott pointed out at the awards evening, the programme is about creating equity in South Africa.

"Its pioneering work has begun to bear fruit," he added. "UCT has shown real commitment to this kind of work during the past 25 years when other institutions have not done so."

At the function, swept along by a marimba band and the vocal offerings of the students, mainly black, it was hard to imagine the campus of Saville's era. Almost 30 years ago, students of colour needed permits to study at UCT. Much has changed, but some hurdles remain. Too many prospective students still struggle with below-par education, missing out on entrance opportunities to the country's tertiary institutions.

And this is where the CADP is doing some sterling work.

It's also clear from the attendant throng that this is a programme that has been built on people - both academic and administrative. Students acknowledged the real value that these people have played in their progress. Among the invited guests was a star lineup, including commerce dean Professor Doug Pitt (who acted as MC), DVC Professor Martin Hall, and CHED dean Associate Professor Nan Yeld.

But the evening belonged to the students; over 50 awards were presented for academic achievements.

"These awards provide an incentive for students and create a forum for public recognition," said Pym. Hall left them with a challenge: "When all of you are very successful, we hope you will also give back to UCT."

In her speech, one of the students, Landiwe Sindani, said: "It was not until I reached Accounts 2 that I realised that I would not have made it this far if it wasn't for the belief all the CADP staff had in me and the support they offered. That thought has kept me striving hard, even today, and kept me believing that I am not only an ambassador for UCT, but an example that your background does not determine your destiny. It is your attitude, surrounding yourself with people that bring out the best in you, and hard work that keep you soaring higher."