Hockey coach all for hard work 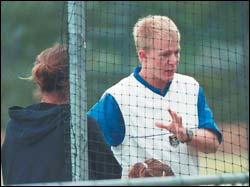 Under the watchful eye of Charlie Stuart, the UCT women's hockey first side is enjoying its best season yet.

The side is currently in second spot on the WP Grand Challenge log, within sight of leaders University of Stellenbosch. And the team also won promotion to the SASSU A section - where they will be competing next year - after winning the B section at a canter recently.

Originally an assistant coach to national player and UCT captain/coach Kerry Bee, who's off to the Olympics, Stuart is now taking sole charge of the team.

"Kerry is a phenomenal player and coach who I have learned a lot from. Having experience at a national level, she brings cutting-edge skills back into the UCT environment.

"We have also complimented each other's knowledge because while Kerry plays in an attacking position, I have always been a defender," he added.

While completing his business science degree and postgraduate diploma in accounting at UCT, Stuart played for the men's first team until the end of 2003. He now plays for Pinelands. One of his first achievements with his Pinelands side was to help them dethrone UCT at this year's pre-season indoor hockey tournament.

For the UCT graduate, getting the best out of his team requires hard work and not allowing the players to slump into comfort zones.

"As a team we have three main focus areas," he explained. "We strive for responsibility both on and off the field, we want to work to continually improve our performance and we hope to create a good vibe. It's important the players enjoy being out on the field."

It's a coaching philosophy that appears to be paying off, earning him recognition not only on the scoreboard but also from his colleagues.

According to the men's hockey first team coach Pierre le Roux, Stuart is going places in terms of his coaching abilities.

"This is the first big step in his coaching career," said Le Roux who lectures on the engineering faculty's academic development programme. "I see a bright future ahead of him."

When he is not waving his magic wand on the hockey field, Stuart can be found completing his second year of articles with financial firm PricewaterhouseCoopers. En route to becoming a chartered accountant, his first year of internship was spent at UCT doing academic articles in the commerce faculty.