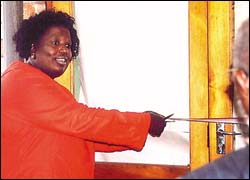 After many delays and unforeseen complications, Shawco has finally opened the doors of its Nyanga Seniors' Club.

As with other Shawco clubs for adults, the club offers day-care services to "vulnerable adults", be they pensioners or those on disability grants, explains Shawco fundraiser Anna du Bois. These services include meals and occupational therapy sessions from UCT students.

The club can accommodate up to 100 day-members, and will continue to provide meals-on-wheels to those who are too frail to come to the centre. The Nyanga club will also - again in keeping with practices at other Shawco clubs - offer a range of activities for its members, including daily teas and lunches, outings, as well as talks by invited speakers.

The official opening of the club took place on May 29, and was attended by more than 200 people. Kholeka Mqulwana, provincial minister of social development and poverty alleviation, was on hand to do the ribbon-cutting honours.

The City of Cape Town has built a new facility for the club, while the Ernest and Brendalyn Stempel Foundation in the United States and the National Lottery Distribution Trust Fund provided funds to furnish the site. In addition, the club also received a donation of armchairs from Peter Cork furniture manufacturers, while Game stores, Telfa and other suppliers have all given generous discounts. Floral arrangements for the ceremony were sponsored by the Little Denmark Flower Studio, which usually supplies flowers to the Cullinan Hotel, the City Lodge and guesthouses around the city.