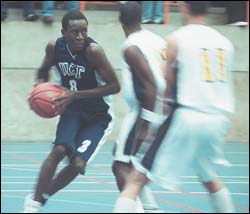 It's a blur: UCT's John Mumba (No 8 on shirt) whizzes past two Cape Tech rivals in UCT's convincing 86-48 win.

The UCT and Cape Tech basketball teams have been involved in a couple of nailbiters over the past few years, no one side quite getting the upper hand over the other for more than one game.

The sides' clash on Sunday, May 24, promised to be another sizzler. Things didn't quite pan out that way, however.

The final quarter was the closest one, UCT netting only seven points to Cape Tech's six. But by then, of course, UCT had romped to an 86-48 win, the most convincing margin of victory in recent matches between the two sides.