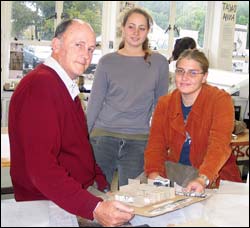 Lucie de Moyencourt and Stephanie Potgieter, both second-year students in the School of Architecture, Planning and Geomatics, collected a purse of R10 000 each in recognition of their outstanding pieces of work, completed in the design studio.

The awards, which are approximately 20 years old, are considered the premier accolade of their kind in the country and were originally made to third-year students. However, this year organisers decided to run the competition for second-year students registered at South African architectural institutions.

Responding to the brief (set this year by the University of Natal), De Moyencourt and Potgieter had to seek out a group of vulnerable people (AIDS orphans, impoverished communities) and design a building related to the situation they found themselves in.

Coordinating the competition requirements with his students' field trip, Emeritus Professor Julian Cooke focused the project on a group of labourer cottages in Swellendam.

"Typical of a previously racially divided South African town, the poorer community is located on the outskirts of the urban area. The cottages lie in between and their development offers the opportunity to tie the two parts together," Cooke explained. "With a river running through it and space to expand housing, we realised the stretch of land had enormous potential to make a model for an integrated, sustainable and more densely-occupied town."

For De Moyencourt and Potgieter, the challenge was that the project involved design at all scales - from the town as a whole, to a long street, to the details of the houses. This was considerably wider in scope than they had previously experienced.

"This wasn't just about designing a house but integrating an entire piece of a town, complete with agricultural allotments, sports fields, bridges, streets and a river," De Moyencourt explained.

Potgieter added: "It was an all-encompassing project, which was socially orientated and it also focused on sustainability."

Unable to get time off from their studies, the two could not attend the annual student architectural conference, held in Durban earlier this year, where their winning designs were displayed. But fellow students kept them posted on the outcome of the results, phoning them immediately once an announcement had been made.

De Moyencourt will be using her winnings to fund a trip to Italy in June - "a bit of a shopping spree included"-, while Potgieter will be visiting Aspen at the end of the year as part of a "working holiday".