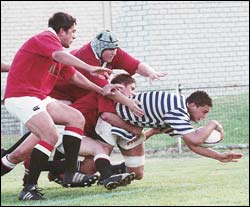 The UCT FNB first team had plenty to smile about after its May 1 tit-for-tat Super League A encounter with NTC, aka Northerns Tygerberg College. Not only did UCT win the match, but the side also, as payoff for the UCT Rugby Club's steadfast transformation programme, fielded five black players in the day's starting line-up.

Prop Vakai "Fish" Hove, flankers Mpho Mbiyozo and Mwali Soul, lock Immanuel McKenzie (son of politician Patrick McKenzie) and left wing Khaya Sonstele were all included in the starting 15 for the NTC match. In addition, flyhalf Isma-eel Dollie, who helped the SA team to glory at the under-19 world championships in 2003, came on as a second-half substitute.

UCT director of rugby, Spencer King, insists that the six players - and there are a couple more waiting in the wings - were in the team because they're quality rugby players. "They're all in the side on merit," he said. "No quotas were necessary."

The UCT Rugby Club was also beginning to see results for its Vision 2000 project, an initiative to attract more black students into its fold, he indicated. "For us, this is something special," he told Monday Paper while pacing the sidelines at the Jan Burger Stadium in Parow North.

To vindicate King's words, Hove (2), Mbiyozo and McKenzie all scored tries in UCT's 30-25 defeat of NTC, a tussle in which the lead changed hands a couple of times. Dollie also booted over a crucial long-distance penalty late in the second half.

The deserved victory came just days after a 19-42 thrashing at the hands of Victorians, and probably went a long way to strengthening the team's resolve for its intervarsity clash against Maties over the past weekend (read our report in next week's Monday Paper).

More good news on the day was that all other eight UCT teams also won their May Day matches.