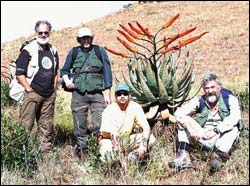 In a collaborative project, a UCT geologist together with scientists from the United States, Norway and Canada have identified what is believed to be evidence of one of earth's earliest forms of life, a finding that could factor heavily in the discussions of the origins of life.