Never too late to shine 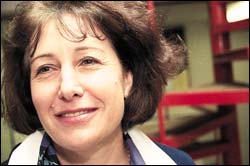 New world: Eve Layton, who came to UCT at the tender age of 42, has been named the country's top final-year social work student.

Layton received the merit award for her honour's year, which she completed at the end of 2003, from the South African Council for Social Service Professions (SACSSP). It was handed to her by the council's Mary Turok at a recent awards and pledging function of the UCT Department of Social Development. While the award, a certificate, came with no fat scholarship or cheque and not much fanfare other than the applause of staff and students, Layton sees the accolade as an "affirmation".

At the end of 1999, aged 42 and after a number of years in the hospitality industry coddling guests at some of the world's snazziest and priciest hotels - the London Hilton, the Hilton International in Brussels, Belgium and, since it first opened its doors in 1997, Cape Town's Table Bay Hotel - Layton decided that she was meant to do other things with her life. "I wanted to do work that spoke more to my soul and my inner spirit," she says.

She had an idea what it was. For some 22 years she had been doing volunteer work of some kind or the other - counselling, group facilitating and life-skills training - with children, the aged, the blind, destitute women, teenage mothers, as well as the callers and trainee counsellors of LifeLine, where she helped out for 15 of those 22 years.

"These skills - in counselling, in group facilitation, in developing people - are skills that are formalised and taught and supervised in social work studies," she says of her decision to register for an undergraduate degree in social work in 2000. "So I really just formalised what was a voluntary interest into a career."

Any doubts or reservations about her choice - she, with a laugh, puts it down to a mid-life crisis - soon evaporated as she began to hog the department's class medals, bagging eight in her first three years. These were in recognition of the 23 first-class passes she chalked up for her 24 subjects, denied a clean sweep by just one percentage point when she got a 74% pass for "a particularly complex sociology subject".

She revelled in her studies, soaking up the theory - "I loved being in the lectures and hearing my lecturers' wisdom and experience" - and relishing the field work, where she could put everything she learned in class into practice. She's even found herself a niche. For her master's studies, which she started this year, Layton is exploring the topic of spiritually-sensitive social work, a field hardly covered in South Africa and an interest that springs from her current work with St Luke's Hospice, which gives care to the terminally-ill. Layton believes all social work "demands a recognition that people have a spiritual dimension, that we've a mind, a body, and a spirit, and distress in one area can impact on the others".

She continues: "Spiritually-sensitive social work respects the many diverse ways in which people explore, express and celebrate meaning, purpose, connectedness, resilience, transformation and transcendence within the joys and struggles of their human experience. Knowing how to assess and respond to people's spiritual, religious or existential concerns, in addition to their very practical needs, is central to encouraging renewed well-being at that very deep heart/soul/spirit level."

Working under the supervision of UCT's Dr Connie O'Brien, who is also a nun, Layton has to rely heavily on the texts and research of US academics and practitioners who have established themselves as specialists in this field.

Her current studies, together with her trove of class medals and the SACSSP plaudit, has Layton convinced that she has, after years of responding to the whims and fancies of wealthy hotel guests, finally found her place in the world, a place where she can work with "real people with real issues". These awards "come as a confirmation," she observes, "that I'm at the right place at the right time doing the right thing".