Hambidge has three reasons for celebrating 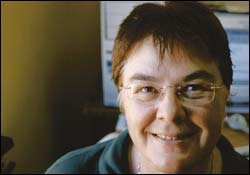 Professor Joan Hambidge, deputy dean in the Faculty of Humanities and professor of Afrikaans literature, recently signed three publishing contracts on one day.

A volume of poetry, En Skielik is Dit Aand; an anthology, Die Buigsaamheid van Verdriet, hand-picked from previous collections; as well as a novel, Kladboek, have all been accepted by Protea Publishing House in Pretoria. The three books will be released this year.

Hambidge, a prodigious Afrikaans writer, is also completing a volume of translations, The Coroner's Wife, and she has dispatched a novel, Chinese Box, to a publisher in the United States.

As lecturer and administrator, time-management is the key to Hambidge's productivity. "The loneliness of the long-distance writer," she said when asked how she maintained her different roles as novelist and poet.

"I commenced Kladboek while doing research in the US and Japan. It is an academic novel reflecting on the relationship between reality and fiction. The narrator, a lecturer, reads a paper on psychonalysis at a conference. It is a novel on the process of writing a novel and the decisions of the real author on what to discard in a story. The so-called 'inappropriate' or transgressive experiences jotted down in a scribbler becomes the main obsession of the narrator whose lover criticises her fiction and poetry."

Hambidge's first novel, Die Judaskus (1998), won wide critical acclaim. She received the Eugene Marais Prize for Poetry in 1987, while Skoppensboer, another of her novels, was short-listed for the Insig/Sanlam Award three years ago.