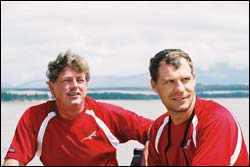 Nine intrepid adventurers (three of whom are UCT graduates) have traversed more than 2 500 kilometres of the mighty Zambezi to help raise funds to fight malaria.

The Old Mutual Zambezi Wakka (which means a river event) set off near Angola on March 19 in three rubber ducks and reached the river's mouth in Mozambique on April 11, despite being detained in Zimbabwe after a misunderstanding regarding their permits.

One of the objectives of the expedition was to raise awareness and funds to help support programmes that combat the scourge of malaria in southern Africa.

More than a million people die of malaria annually. It is Africa's leading cause of infant mortality (accounting for around 20% of childhood deaths) and it kills one child in Africa every 30 seconds.

It is, however, a disease that is both preventable and treatable through the combination of appropriate insecticide-spraying and anti-malarial drug combination therapies.

"The expedition has joined forces with NGO Africa Fighting Malaria (AFM) to act as the team's lead advisor on issues concerning malaria," he pointed out.

"Besides creating awareness of malaria and raising funds from corporates to donate to anti-malaria projects, our aim was to distribute anti-malaria 'gift packs' and information to residents within the Zambezi valley. Funds raised by the journey will be allocated to anti-malarial projects located both in South Africa and in the countries we passed through, namely Zambia, Zimbabwe and Mozambique."

The wayfarers have already raised more than R300 000 for the cause from a range of donors, including Old Mutual, Anglovaal Industries and Sanlam. Each team member contributed R30 000 to their adventure-with-a-purpose and received sponsorship in kind for equipment as well as a webpage.

The Wakka took a distressing turn on April 1 (it was no joke), when seven crew members were detained by Zimbabwean police, allegedly for a misunderstanding over their permits.

The team was freed late on April 2 and allowed to continue their journey through the hippo-rich waters of Mana Pools early the next morning.

To have an adventure along one of the most beautiful and least travelled rivers in the world, while doing something for a good cause, was Cumming's motivation for taking part in the Wakka.

Fellow expedition member Andrew Weinberg also has UCT links. As a social science student (archaeology and stone tool making were his favourite subjects), he started a budget-price car hire company with dilapidated VW beetles being rented to foreign students. Business grew and Weinberg managed to develop a safari company that operated overland tours through most of southern Africa.

He moved the safari operation to Harare in 1993 and opened a successful budget lodge there and another in Malawi.

"After selling my businesses in 1995, I took up a position as manager of a rafting and flying company in Victoria Falls. Before arriving in Vic Falls, I contracted malaria and was seriously ill for many months. The plight of the local inhabitants facing malaria is overwhelming and this was an opportunity to support them in their fight against malaria," commented Weinberg, who currently develops new business ventures with Old Mutual Properties.

A director and shareholder in a financial services company that specialises in financial engineering, Simon Espley completed his accounting studies at UCT in 1987.

Espley's love affair with the Zambezi was the reason for his involvement in the jaunt. "I'm mad about wildlife and birds and I love travelling, especially to remote wilderness areas," he said.

Espley is also a confirmed conservationist who regularly writes for Africa Geographic magazine.