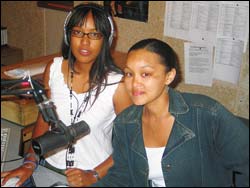 "It's funky but informative," Ronell Swartbooi says of the new youth magazine programme on UCT Radio.

A first for the station, the weekly hour-long show is being piloted by Workers World Media Productions on eight community radio stations around the province. DIGGZ - as its funky name goes - is aimed at the under-25s. Into its third week, the plan is to have another 11 or so programmes to test the waters.

It's a no-holds barred magazine show with guest slots, presenting topics "with a bite". Essentially it's an education programme, giving youth a voice on a host of things that concern them; education, career opportunities, unemployment, globalisation, drugs, sex –

"Students are concerned about things happening on campus and off campus," Swartbooi adds. "This is where they can voice those things."

One of four UCT presenters chosen to participate in the pilot programmes, Swartbooi regards her selection as something of a coup. "There were hundreds of nominations by members of the target communities," she explains. "They were looking for people with community participation, empathy with youth issues and an aptitude for media work."

Swartbooi fits the brief on all counts. She completed her film and media studies at UCT last year and had worked on UCT Radio. When the call came through for the DIGGZ programme she put up her hand. With the commission came mandatory training - in November the team began rigorous training in Workers World workshops. "They covered a range of things to give us a solid background - local history, colonialism, apartheid, capitalism, class and gender issues, globalisation and the role of media," she explains.

"I still see myself as a student and I want to address the issues that bother other UCT students - overcrowding, drastic fee increases, career options – "

She presents a quieter persona than suggested by her drama elective. Until she's in studio. Today she and co-host Yumna Martin are preparing for their second lunch-time show. CDs slide into cases, notes and programme cues are shuffled from files. "I was so nervous last week, I forgot to tape the show," Swartbooi smiles. She slips a cassette in to the radio/tape. No such mistake this time, although today Martin is the one who admits to a frisson of nerves.

There's music playing while the swap takes place, one announcer for another. The lyrics are, well, startling. Even Swartbooi buckles under the onslaught. "Get that stuff off quickly," she suggests.

Swartbooi will use the experience as a platform for her career. Where does she hope to be in ten years? She laughs. She has a two-year plan to work in community radio. That's far enough, thank you.

She hopes that once the shows have been evaluated Workers World's sponsors abroad will consider more funding.

In South Africa radio is the medium, she believes. "It reaches everyone, even the less-privileged. "It's popular and it's widespread."