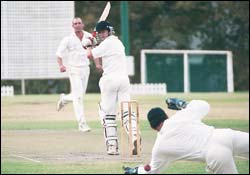 Victories in their last three games would have been enough to ensure the UCT cricket first team yet another two-day league title.

The side, however, slipped in the first of these three matches, going down to Cape Town Cricket Club on Saturday, February 27.

UCT started the day on 180 for five after Cape Town had called their first innings to a close at 250/7 the previous Saturday. UCT pushed on for another 49 runs, and declared at 229/5 early on the morning.

Doug Worth (48), Farhaan Behardien (48 not out) and Neil Kruger (41) were the best performers with the bat.

In their second innings Cape Town racked up 160, thanks mainly to stubborn ninth- and last-wicket stands. UCT bowlers Behardien (5/27) and player-coach Brian Murphy (4/71) did most of the damage, bringing their rivals' innings to a halt at just after four on the afternoon.

There were worries that the overcast conditions and light showers would deteriorate into a downpour and force a draw, but the light and skies held as UCT went in, needing to score 182 off the day's remaining 37 overs at a rate of just under five runs per over. Their game plan took a knock in the very first over, however, when big-hitter Worth was run out without having faced a single ball.

Thereafter wickets kept tumbling at regular intervals, and the side was finally knocked over for a piffling 138, 44 runs short of the target. Behardien put up a token resistance with his 28 runs.

The defeat has, however, not ended UCT's title hopes, and the side finds itself, thanks to other teams' performances, still very much in the run for glory. But the team cannot falter again over its final two matches.