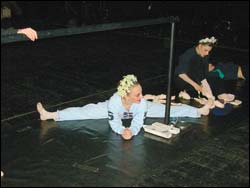 It was lights, cameras and action as 50 cast and crew members and 18 vehicles descended on UCT's School of Dance to film a scene for an international BMW advertisement.

And cast as the leading lady in this scene was none other than Cape Town City Ballet's (CTCB) Laura Bosenberg, who recently joined the company after completing two years at UCT.

The school was a hive of activity from early morning on February 18 as the crew transformed the top studio into a film set.

Although only a half-day shoot, the filming of the advertisement required a good deal of planning and co-ordination, which was tackled by CTCB's publicist Andrew Warth.

Warth was also on set to assist Bosenberg, who had to repeat a sequence of choreographed steps over and over again while being watched by an aspiring troupe of baby ballerinas.

"It was a surreal experience," commented a glowing Bosenberg, who is enjoying her three-week vacation before the start of a new season.

"It was the first time I had done a commercial and I loved every minute of it. It was fascinating meeting so many different people on the set."

As a source of additional income, the money received from the rental of the studio will directly benefit students and will be spent wisely by the school's director, Professor Elizabeth Triegaardt. For Bosenberg, her earnings will go towards purchasing a car.