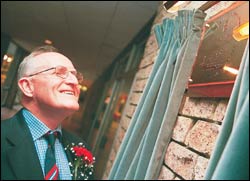 Saluting a pioneer: Prof JP van Niekerk with the plaque mounted in his honour by the Faculty of Health Sciences.

The toast of health sciences

The Health Sciences Faculty has paid homage to Emeritus Dean, Professor JP van Niekerk, mounting a plaque in the medical school's Barnard Fuller Building for his role in its establishment.

Appointed as the faculty's first deputy dean in the early 1970s and serving under then-dean, Professor David McKenzie, Van Niekerk was the driving force behind the construction of the Barnard Fuller Building, which grew out of a more modest initial venture to establish a postgraduate medical centre at the medical school. This centre would, among other things, be responsible for the provision of continuing medical education in the faculty.

The multi-purpose Barnard Fuller Building would eventually house the dean's suite of offices, restaurants (since closed), the medical alumni club (aka that venerable watering hole, the MAC club), squash courts and quarters for the Conference Management Centre (CMC), among other facilities.

Erecting the building - and finding the money to do so - was no easy task, recalled the head of the Department of Medicine, Professor Ralph Kirsch, who worked alongside Van Niekerk at the time. "The fact that it arrived is in no small measure due to JP," noted Kirsch.

German students have become an establishment on the Faculty of Law's LLM courses over the past years, attracted, some say, by the sun, sea and mountains.

But the mise-en-scÃ¨ne is just part of the allure. According to Marco Schmitt of the German Consulate in Cape Town, the main attraction is the teaching - the fact that UCT's postgraduate law courses (there are some 45 on offer) involve taught coursework.

Schmitt was speaking at the handover of over 60 volumes of law reports, treatises and textbooks to the Law Library, the third such donation under the auspices of the Deutsche Forschungsgemeinschaft (German Research Foundation, or DFG).

This material is not of course primarily for the use of the faculty's German students. This resource is used by faculty staff, many of whom are fluent in German.

Cathy Powell, a lecturer in public law, did her LLM at Humboldt University in Berlin eight years ago, and Associate Professor Anton Fagan is currently in Hamburg on a Humboldt research fellowship. Four other professors in the faculty have been awarded this prestigious opportunity over the years.

According to the faculty, the German law students visiting UCT shores lean towards courses with an international flavour, such as shipping, marine, environmental or constitutional law.

"Many practitioners in Hamburg and Bremen now have a UCT LLM in shipping law," said Professor John Hare of the Department of Commercial Law. "UCT is able to offer the German shipping lawyer tuition in English-sourced common law, which sits well with the civilian background which we in South Africa share with our continental colleagues."

The School of Health and Rehabilitation Sciences is currently playing host to two research fellows from Zimbabwe.

Vyvienne M'kumbuzi and Tecla Mlambo, both lecturers at the University of Zimbabwe, are at UCT for a three-month sojourn under the aegis of UCT's University Science, Humanities and Engineering Partnerships in Africa (USHEPiA) programme, run with seven other universities in six African countries. USHEPiA aims, via a cache of research awards, to promote collaboration among established African researchers in the generation and dissemination of knowledge, and through this to build institutional and human capacity in cash-strapped African universities.

M'kumbuzi and Mlambo are at UCT putting the final touches to some manuscripts. M'kumbuzi, hosted by the Division of Physiotherapy, is looking at the quality of patient records in physiotherapy settings, based on fieldwork she did in a selection of state hospitals, private practices and community clinics in South Africa.

Mlambo, who in turn is stationed with the Division of Occupational Therapy, is working on two possible articles.

In the first (echoing M'kumbuzi's topic), she is scrutinising the quality of occupational therapy records for stroke patients at one academic hospital in South Africa.

In the second she is examining the timing of treatment for such patients (whether occupational therapists are starting and ending treatment at the right time).

Film and new media on target with websites

The Institute for Film and New Media, which this year launched its first programmes, wrapped 2003 up in style when it netted a prized bronze medal at the Western Cape's 25th Annual Stone Awards, presented by the National Television and Video Association (NTVA) at the Theatre on the Bay on November 17.

The institute bagged the award for three websites designed by new media lecturer Johann van der Schijff, students and external collaborators for the Michaelis School of Fine Art (www.michaelis.uct.ac.za), the institute itself (www.ifnm.uct.ac.za) and the Department of Drama (www.drama.uct.ac.za). The objective behind the award-winning creations, explained Van der Schijff, was to implement three database-driven websites (like that of the UCT site) targeted at staff, current students and, of course, prospective students.

Incorporating everything from Flash animation to freeware (software made freely available by the authors to others for further development), and hinged around the Institute's ANVIL website management back-end software, the design of the site was something of a balancing act, he added.

"The idea was to produce a dynamic website where the power would be taken away from one website manager, for example, and given to all staff and students who can log in and add course notes or projects or any other media to the website at any time from any computer with Internet access," said Van der Schijff. "In a conventional or a static web site, all data already exists before the user accesses it, but in a dynamic website, the data is created from the database at the moment the user downloads a web page, thereby enabling a website to change on a day-to-day basis as more information is added by the users.

"I wanted to design something that was very simple, very easy to use and that's dynamic, but also something that is contemporary and funky and would attract students who want to study new media, for instance. So it's a balance between looking cool, and getting information out fast to the outside world." The Stone awards is the annual regional competition of the Western Cape chapter of the NTVA, and aims to recognise excellence in television, video and related media programmes made in the Western Cape over the past 12 months.

The colonel takes SHAWCO under its wing

The Kentucky Fried Chicken chain of fast-food outlets has donated R10 000 to the Students' Health and Welfare Centres Organisation (SHAWCO).

The money will go towards SHAWCO's STEP and Masizame projects.

STEP, aka the Student Tutoring and Education Project, works with primary and high school children, providing curriculum-enrichment activities focusing mainly on maths and literacy. Activities are theme-based and cover a range of topics, from HIV/AIDS to environment and basic business skills. In turn, the Masizame project involves children in institutions. Student volunteers visit children in three children's homes and one convalescent hospital, providing them with stimulating educational activities and taking them on outings.