Heinz limbers up for World Idols 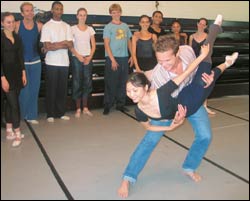 Hold on: Heinz Wickler tries his hand at ballet at the CTCB studios

Winckler, who is the first winner of the South African Idols competition, will be competing for the title of World Idol in England in mid-December. Contestants include other Pop Idol winners, Will Young and Kelly Clarkson.

Preparing hard for the international event, Winkcler will be singing "I don't want to miss a thing" by super rock group Aerosmith.

"I'm very excited and looking forward to the competition," he said.

Asking what he thought of the ballet, Wincler said that he does not watch ballet every week, but he enjoys a good performance.

"I appreciate people who work hard," he added.