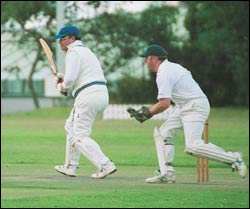 Standing strong: Prof Dave Reid (above), here on his way to a 65* against The Ridge, has hit a purple patch for the UCT staff cricket team.

Back-to-back victories for the UCT staff cricket team at the start of the new summer season was followed by the narrowest of losses to Constantia Uitsig last Sunday, November 16.

After two memorable wins - the second against the Ridge on the back of an unbeaten 65 by Professor Dave Reid, a bright 41 by debutant Peter Buckton and two overs of mesmerising leg spin by Associate Professor Dave Wardle (three wickets for only three runs) - in their first two matches, the side went into the Uitsig contest with high expectations.

Basking in a fabulous day of hot sun and little wind, the staff struggled to contain the Uitsig batters, who took advantage of the short boundaries to amass a total of 204-9 in 35 overs. With boundaries whistling off practically every second ball, notable bowling spells were few and far between, with only Reid managing a spell of less than four per over, while capturing three valuable wickets.

After a slow start, the UCT batting gradually increased its tempo with game one hero Herbert Hindley continuing his good form with an unbeaten 36. It was left to Reid - hitting something of a purple patch - to take Uitsig on with a flashing 54 not out, which included two sixes and two fours in the last over, to get within 11 of the victory target.