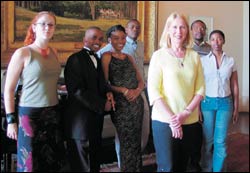 The South African College of Music recently hosted a massive (and new) singing competition, with prize money to the value of R20 000 on offer.

The Schock Music Prize competition, sponsored by the Schock Foundation, is running for the second year, and will become an annual event. The competition is open to all full-time classical voice students in good academic standing.

This year, the foundation's Marilyn Schock flew in from Australia to be at the final round that was held at the Baxter.

With some rounds requiring music and others not, competitors have to provide their own accompanists. The final round saw six talented singers battle it out for first prize. Six prizes are awarded (first, second and third) to both tenors and sopranos, making all the finalists winners.