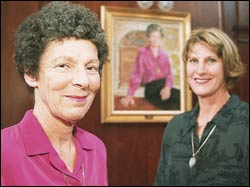 At the end of this year Fuller Hall will say goodbye to Sue Folb who will be retiring after nine years as warden of the residence.

In her honour, a portrait was unveiled at an academic dinner on September 17. This will hang in Fuller Hall, along with the portraits of previous wardens.

It has been the tradition at Fuller, and their brother residence, Smuts Hall, to have portraits of the wardens grace their walls.

The artist, Caerli Hare, said that it had been a "collaborative affair", which included interviews, sketches, and for Folb, 12 hours of sitting.

Hare was also the artist for the portrait of Oliver Tambo, which hangs in the Law Faculty Moot Court.

Folb, along with her husband, Professor Peter Folb, who also retires at the end of the year, plan a rather busy retirement which will see them spending time in both Cape Town and London for the next two years.

Wardening, she says, keeps one young while adding to the grey hairs. She will miss the energy that comes from living in such a diverse and stimulating community, as well as her involvement as residence development officer in the broader residence system.

Note: Fuller and Smuts Halls will celebrate their 75-year reunion from December 12-14.

Those planning to attend are asked to register as soon as possible. For further information contact Sue Folb on 650-3940 or shosf@protem.uct.ac.za.