Mud galore, and an even score 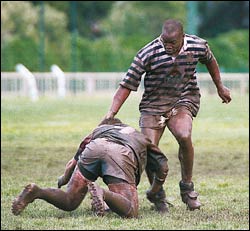 Playing in muddy conditions that didn't favour their natural running game, the UCT FNB rugby side scraped together a 24-24 draw against Helderberg on Saturday, September 20.

As the week before, the Ikeys again relinquished a useful early lead (10-0) as Helderberg slowly accrued points throughout the first half. By halftime, UCT was down 10-17 and firmly on the back foot. After repelling wave after wave of early Helderberg attacks, the side equalised with a goal well into the second half (17-17). Helderberg took the lead again a few minutes later, however, with a goal of their own (17-24).

Helderberg piled on the pressure, and for long stretches UCT was unable to get the ball out of its quarter. Only some tenacious tackling kept the Ikeys in the game.

Against the run of play, UCT again touched down late in the game to draw level and share the match points. The side now lies fifth in the super league.

The Maties first team has yet again finished at the top of the super league, continuing its stranglehold on the trophy.

While the first team stumbled through their game, the big news on the weekend came from the UCT MC Marais XV - the fifth side - who clinched their league title by beating Parow 29-5 in a fierce encounter.

Most of the UCT sides went up against the University of Stellenbosch this past weekend (see the Monday Paper report next week).

The U-20 A1 and Third XV are both in line to win their respective league titles, but need to win their games against Maties.