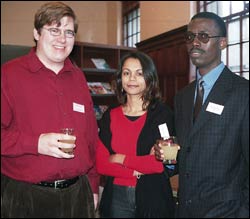 Postgraduate prowess: Among those who attended the recent UCT Research Associateships function at the new Postgraduate Centre were (from left) Gareth Boxall (master's in mathematics), Floretta Boonzaaier (PhD in psychology) and Dominique Mwepu (PhD in modern and classical languages). Mwepu hails from the Democratic Republic of the Congo (DRC).

The cream of UCT's postgraduate students gathered at the new Postgraduate Centre in the Otto Beit Building for the annual awards function, honouring them for sterling research in their respective fields.

Their supervisors were also invited to attend the celebration. Speaking at the spacious new premises, guest of honour, Professor Cheryl de la Rey, Deputy Vice-Chancellor (innovation and research) said the awards, the UCT Research Asociateships, were centred on excellence in research.

Candidates, she said, had been selected exclusively on the basis of their track records, which demonstrated excellent academic performance.

"We see the awardees as researchers in training and future research leaders in their fields."

These researchers, she added, were critical to the university's research strategy, one that ensured UCT had a strong pool of committed and exemplary researchers to replace those who were retiring.

Postgraduate students make up about one-third of UCT's student body. Most are funded through independent scholarships, donations and loans, administered through the Postgraduate Funding Office.

UCT held a very successful debut postgraduate open day, which helped to reconnect the university with local alumni while recruiting graduates for further studies. About 700 people, including members of the public and existing students, attended the event on September 6 when they viewed exhibitions and attended talks. The event was heartily supported by all faculties. .