Of breeds, braks and boer dogs 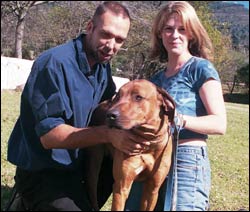 Drs Lance van Sittert and Sandra Swart with Swart's Rhodesian Ridgeback, Kataza, Ndebele for "the troublesome one". Ridgebacks were bred in former Rhodesia to bay lion but became part of broader societal changes. World War 2 accelerated African urbanisation and fearing the swart gevaar, many urban whites looked to Afrikaner nationalism for political salvation and a dog breed forged on the frontier for personal protection.

Mark Antony's words "Cry 'havoc' and let slip the dogs of war" in Shakespeare's Julius Caesar paint a vivid image. These dogs are primitive and wild, harbingers of death and destruction, unruly and pitiless devourers of flesh, more reflective of their wolf ancestor, Canis lupus, than Canis familiaris, their domesticated cousins often eulogised in literature for their worthier human traits: loyalty, companionship and protection.

The image of dogs in history is ambivalent; they even mirror the distinctive aspects of national social and political identity, as two researchers have found.

"And because of their relationship with men, some of our own history as well," Swart added.

Dogs are invested with human identity, both individual and national, and thus serve as proxy in reflecting on human society, they contend.

"The use of the dog to think about human society has a long scholarly pedigree and the recent animal turn in the humanities has sparked a florescence of canine studies," said Van Sittert.

The two historians, co-secretaries of the Historical Society of South Africa, were brought together by divergent angles of research. Van Sittert wrote about the 1893 rabies epidemic in Port Elizabeth and the extermination of wild carnivores in the Cape Colony between 1889 and1910. Swart had tackled the issue of wild and domestic dogs (the latter brought in distemper) in the Hwange National Park in Zimbabwe, for her MSc thesis at Oxford in 2001.

Popular South African dog breeds have been invented largely in the public's mind, they contend, coming to signify the national South African identity through the various stages in our history.

"Each epoch of human-canine interaction in the sub-continent produced its own peculiar animal, literally a pre-colonial, colonial and post-colonial dog, as well as its 'dark doppelganger', the wild 'kaffir' or stray dog," Van Sittert noted.

Records show that the first primitive urr-dog appeared in Germany 14 000 years ago with the first distinguishable dog breeds dating back to North Africa 3 000 to 4 000 years ago. By 2000 Before the Present (BP) the Romans had begun to breed particular dog types to serve particular social roles. While little is known of the early dogs of southern Africa, in 1497 Portuguese explorer Vasco da Gama saw dogs in a San community at St Helena Bay.

It is likely these were the ancestors of those dogs introduced into southern Africa 2000 BP by Bantu-speaking agriculturalists and or Khoikhoi pastoralists, Swart contended.

Later, Canis familiaris became an integral member of what the duo call the "portmanteau biota", part of the flora and fauna that escorted European settlers to southern Africa from the mid-17th century. By the start of the 19th century dogs were pervasive in the colonial countryside, "a good pack of dogs being necessary for travel in the region", according to early European travellers.

The second half of the 19th century marked a major watershed in the canine history of the region as a new sensibility towards animals emerged among the urban middle class, modelled on Victorian Britain.

"They championed a new sensibility embodied by the notions of humanitarianism and sportsmanship in their increasingly detached and ritualised relations with domestic and wild animals," Van Sittert noted.

Cruelty to animals was banned in the Cape (1856), Natal (1874), the Orange Free State (1876) and the South African Republic (1888). The mother Society for the Prevention of Cruelty to Animals (SPCA) was founded in Cape Town in 1872. Another milestone was the formation of the South African Kennel Club in 1883.

"The institutionalised dog breed was founded on Victorian typological thinking about race, quality, purity and progress," Swart commented. "The value placed on breed purity was based on older ideas of human aristocracies and thoroughbred animals, and was to resurface in the Nazi endeavour to breed an Aryan superman."

The new national dog mania paralleled the rise of the "urban sportsman" and hunting breeds began to dominate both imports and the dog shows. The spread of rabies also confirmed the need to separate the dogs of the middle class from those of the underclass and legitimised the use of canicide to enforce the race/class quarantine.
"The withdrawal of the British control over the region in 1910 and the rising tide of settler nationalism both endorsed the fundamental tenets of the imperial canine order and forced a continual revision of the boundaries of class and quarantine to suit the requirements of the imagined community," Van Sittert noted.

This, he said, was echoed in the pairing of the young British proconsul with the runt of a mongrel (boer dog) litter in Percy Fitzpatrick's Jock of the Bushveld, published in 1907. "The suggestion was that the hybrid - not the thoroughbred - was designed to inherit the earth by virtue of its Darwinian competitive superiority."

In the wake of this, the boerhond was lauded for its pluck, endurance and talent for hunting leopards and baboons, something uniquely South African on the eve of the Union.

In the 1920s the boerhond was admitted to the South African Kennel Club register. Bred to hunt lions, the dog's future was secured, not by South Africans, but by Rhodesian settlers, where, on the brink of white statehood, a Rhodesian Ridgeback (Lion Dog) Club was formed in the mid 1920s. The new breed was admitted to the SAKC/U's register in 1924.

Stressing a character forged in the bush, its promoters invented a new indigenous breed as the appropriate canine for growing settler nationalism across the region. The Ridgeback enjoyed great popularity, topping the SAKU registrations between 1946 and 1948, appearing even in a formal photograph at the feet of first National Party prime minister, DF Malan, and his family.

The dog also became part of broader societal changes. World War 2 accelerated African urbanisation and amid fears of the swart gevaar, many urban whites looked to Afrikaner nationalism for political salvation and a powerful dog breed forged on the frontier for personal protection.

The wartime fame of Just Nuisance also represented the swansong of the canine imperial order, he added, the death of the "drunken, dissolute great dane, 'symbol' of the British Navy in the peninsula, ceding the stage to Fitzpatrick's indigenous hybrid in 1944".

The Ridgeback became a national dog representing the settler communities. However, the rise of white affluence after the war made it difficult to maintain fidelity to a national breed and the Ridgeback's popularity was swiftly usurped by the collie in 1949 (following Lassie's immortalisation in Hollywood) and thereafter the Alsatian.

The enduring popularity of the Alsatian (top national breed 1952-89) and Doberman pinscher (1976-78) also reflected escalating black opposition to apartheid after 1960, producing a clear preference for large, fierce dogs by whites.

"By 1980 only four of the 177 recognised breeds - Alsatian, Rottweiler, bull terrier and Doberman - accounted for one-third of all SAKU annual registrations," Van Sittert added. "The staffie ousted the Alsatian in 1989, having been cast as the boer dog in the Hollywood version of Jock of the Bushveld." (A record 8 557 staffie registrations were recorded by the SAKU in 1991.)

The current popularity of imported breeds (bulldog and Labrador) masks an underground preference for American pit bull terriers in both white suburbs ("the last line of defence against the barbarians loosed by democracy") and townships and rural areas, enhanced by post-apartheid promotion of gambling in which dog-fighting, although illegal, has provided another outlet for the national gambling proclivities.

More interesting still, Swart added, is the ongoing attempt to substitute the Ridgeback as the national breed (it appeared on postage stamps in 1991 to mark the centenary of the SAKU) with its purported African ancestor, Canis africanus.

An African Indigenous Dog Project was established under the aegis of the SAKU and the National Cultural Museum to initiate a breeding programme.

"Homing and DNA testing were duly employed to reinvent this 'mangy township mongrel' as Canis africanus - the dog of Africa - a new national breed appropriate to the post-1994 rainbow nation," said Swart.

Described as the Iron Age Dog, breeder Johan Gallant says this dog is the world's oldest, having travelled down the continent with Africans who migrated southwards 7 000 years ago.

"It has been linked to the African Renaissance of the 21st century and its popularity grounded on a newfound pride in things purely African," said Swart.

But the authors are sceptical of claims of its "authentic and untouched" lineage.

"It's a business," Swart contended. "Simple biology tells us this is unlikely."

Whether pure bred or not, the African dog has overcome its former "skulking pariah" status, associated with life on the edges of the township, living on rubbish and faeces. Today it is touted in more flattering terms: the sleek body purpose-built for natural selection.

Ironically, says Swart, the rehabilitation of Canis africanus remains an exclusively white project "with no perceptible purchase on the popular imagination of the black majority for whom dogs alternatively remain a symbol of white oppression, following the use of dogs by the police and the army to 'sniff out' criminals and guerrillas".

The researchers say they are aware of gaps in their work. Swart likens their efforts to a "pioneering foray".

"We haven't looked closely at the dog culture among black people where the notion of an underclass remains when it comes to dogs owned by blacks; the notion of threat and disease."

The role of dogs in South Africa's new era is also uncertain. There is a new blood-sport element attached to the new fancy for breeding pit bulls.

They are destined mostly for dog fighting, fast becoming a big sport in the townships and rural areas and dubbed South Africa's new national sport as it crosses both class and race barriers. It rests uneasily on the nobler tenets of a young African democracy.

The duo is also keen to pursue a similar line of study around the invention of other indigenous breeds: the Sotho pony, the Cape horse and Afrikander cattle, the latter "an indigenous miscegenation of European imports and African livestock to breed stronger and better animals capable of withstanding African conditions".

"In humans, this miscegenation was feared and prohibited throughout history," Van Sittert noted.

"The hybrid vigour so sought-after in animals was outlawed among humans as something that would not strengthen but weaken race."