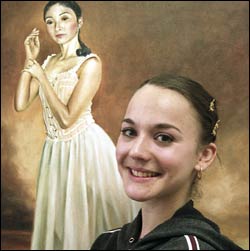 Although softly spoken and surrounded by an aura of sweet innocence, Laura Bosenberg is a determined young lady who is making a name for herself in ballet circles.

Only 19 years old and in the second year of her dance studies at UCT, Bosenberg has just been named as the first cast in Veronica Paepers' Merry Widow.

Bosenberg will share the stage with CTCB principal dancer (and former UCT student) Robin Van Wyk, as they dance the Pas de Deux - a technical and hard dancing role, which involves one male and one female dancer.

"Robin has been touring with the Cats production and has been with CTCB for six years, so it's a wonderful opportunity for me to perform with such an accomplished dancer," said an ecstatic Bosenberg.

With a love for dance and music, Bosenberg began taking ballet lessons at the age of four and she hasn't looked back since.

"Ballet is my passion," she said. "By the time I got to grade 10 I knew what I wanted to do. I love being able to express myself through movement where there is no need for words.

"The role also requires a fair amount of acting and I enjoy playing different characters," she added.

When she's not training six days a week, 12 hours a day, Bosenberg spends her time "just relaxing, reading, watching movies or having coffee with friends".

Bosenberg hopes to be a principal dancer for CTCB one day and if her past roles (in Swan Lake and Orpheus in the Underworld) and early successes are anything to go by she is definitely on her way there.

"It's all about perseverance and staying focused on the bigger picture," she said. "There are tough times as a ballet dancer, when your body is aching and you just want to go home. But there are also rewarding times and these keep you going."

Once this is out of the way, she will concentrate on her end-of-year varsity examinations, which happen to fall right in the middle of Classic Highlights.

"I know what I want to get out of dancing so I'm ready for the challenge and all that it brings," she said.

Classic Highlights is on at Artscape Theatre from October 4-19.