Up, up and away for netball squad 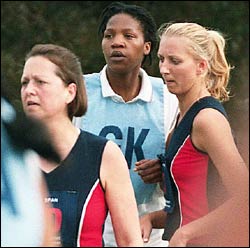 Barricade: Goalkeeper Palesa Mokomele - here in action against Durbanville - was one of UCT's star performers in the team's successful bid for promotion to the Super League in 2004.

The netball first team, after a short sojourn in the Western Province Netball Association's (WPNA) A league, will compete in the Super League in 2004 following their 34-30 victory over close rivals Durbanville A on Saturday, September 6.

After an unbeaten run in the A league for the 2003 season - they beat Durbanville, then the only other undefeated side, by 37-32 in their final league contest a few weeks back. The team had to play off against four other teams (Brackenfell, Durbanville, Goodwood, Tygerberg) for a spot in the Super League next year. Once again, UCT won all its matches to make sure of promotion.

According to coach Alfreda Luyt, some credit for this year's ascendancy should go to sterling performers like goalkeeper Palesa Mokomele (who put in another star turn in the 34-30 win over Durbanville), goal defender and captain Ashante Manetti, and centre Keeyan Dick. Dick was selected for the WP side that took part in the SA under-19 championships this year, while Manetti and Mokomele donned provincial colours in the national under-21 event.