Rugby five to square up to Blue Bulls 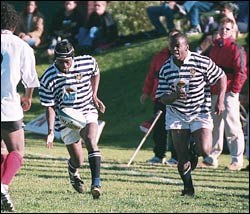 Next stop Blue Bulls: Sakekile Gqeba, about to chip a Villagers player.

Five UCT rugby players were selected for the SASSU national student team that took on the Blue Bulls Merit A side at Loftus Versfeld on August 30.

Under-19 World Cup heroes Isma-eel Dollie (UCT under-20A1) and Paul Delport (who mostly trots out for the Western Province under-20 side nowadays), along with David Edgar (under-20A1 and first team), Sakekile Gqeba and Rory Matthew (both in the Ikeys first team) were all named for the side to travel to Pretoria. Delport had to withdraw because of provincial commitments, however, while the injured Edgar also had to waive the invitation.
At the time of going to print, Dollie, Gqeba and Matthew were headed for Pretoria.

Prior to the SASSU outing, Gqeba, who in 2000 became th e first UCT student to receive a scholarship from the UCT Rugby Football Club Trust Fund, and Matthew had a hand in the UCT's 26-22 victory over Villagers on Saturday, August 23. Gqeba, whose darting runs caused Villagers a couple of headaches on the day, scored one of UCT's two tries, the other five-pointer coming from Anthony "Animal" Roberts, who is becoming a regular on the scoresheets.

The match was also the last for stalwarts Doug Bryant and John Bradshaw, off to Cambridge and Oxford respectively.