Brother follows in his footsteps 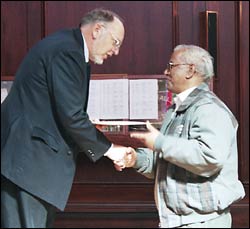 Longest serving: Kenneth Abraham, who has 45 years of service at UCT, gets a long-service award from Deputy Vice-Chancellor Prof Martin West. Abrahams was the longest serving member of staff at the annual function.

Brothers Kenneth and Gerald Abrahams were presented with long-service awards for 45 and 35 years respectively, at an annual ceremony held in Smuts Hall.

They were among 48 staff members who were honoured at the special luncheon on August 19. Deputy Vice-Chancellor Professor Martin West thanked each staff member for their service to the university at a function that was also attended by heads of departments, from engineering and science to student housing and administration.

Kenneth Abrahams has worked in the Bindery Unit since his appointment in 1958, and was the founder member of the Workers' Association, formed in 1965. In 1980 he was elected as chairman and served on the executive committee of the Staff Association until 1990.

In his eulogy, West said that, together with his brother, Gerald, Kenneth had been responsible for the Bindery being moved from upper campus to its present location at Hiddingh. This was because lecturers (who were using the nearby lecture halls) complained about the "disturbance" they created by constantly singing at the tops of their voices!

The brothers were also famous for the many sumptuous braais and lunches they organised for their colleagues.

UCT's Director of Human Resources, Dave van Eeden, said the ceremony celebrated the loyalty that staff members like these had shown the university.