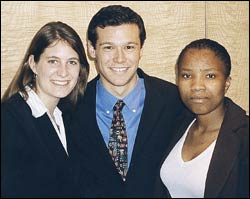 "The competition has been running at UCT for three years and the university continues to produce high-calibre candidates with more winners than any of the other participating South African universities (Wits, Western Cape and Durban-Westville)," said dean of students, Dr Loveness Kaunda.

The UCT trio was among 50 individuals from 19 countries, representing 40 universities. The Institute exposes student leaders to many facets of leadership and provides the tools students need to build their own leadership qualities once they return home.

Each of the UCT candidates showed exceptional leadership qualities. Licina has represented Western Province in maths and debating, and has gone on to represent South Africa in the latter. He was an adjudicator for the World Schools Debating Competition in Singapore last year and coaches his provincial team as well as teams in the townships. He is the financial director of the South African Liberal Students' Association, an organisation that promotes human rights and democracy, which is involved in the university residence sector. He was the youngest head student ever elected and he acts as deputy chair of the Head Students Council. Last year the Smuts Hall Board of Trustees elected him as the Smuts Fellow for 2003. He is also chair of the Science Students' Council and a member of the Student Parliament.

Brooke has been on the Commerce faculty's dean's list for two consecutive years. Prior to university she was selected as a Rotary Exchange student to Canada where she gave presentations to organizations and volunteered at the Rotary Home for Disabled Children. She is presently on the steering committee of Habitat for Humanity and heads the resource and development section as well as being a crew leader building houses. She is part of the Kids Bridge Foundation Ambassador Programme that aims to provide a clearinghouse for the global voice of youth, and has recently been involved in a project to build a crÃ¨che for a woman who looks after 60 children in a small squatter camp shack. In addition, Brooke is subwarden for Fuller Hall and served as the orientation and cultural representative on the house committee last year.

Mfundisi is vice-president of SHAWCO and serves as the organisation's project leader, researching the prevalence of type 2 diabetes in the coloured community. For the past two yeas she has held the office of senior subwarden of her residence hall, name. As chair of the university's independent elections committee, Mfundisi managed the most successful house-committee elections at UCT, providing leadership in managing the residence according to equitable principles.

Brooke found the experience highly stimulating. "I was so inspired, so motivated to come back and make a difference, especially after the bad press South African receives in the media."