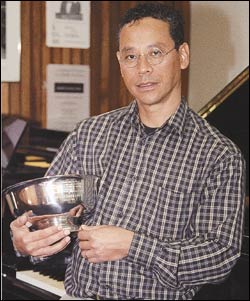 Trophy-hunter: Assoc Prof Franklin Larey with the prestigious Distinguished Alumnus award from the University of Cincinnati College-Conservatory of Music, where he was resident.

Franklin Larey is back in his seat as director of the South African College of Music after six months in the United States as a Fulbright Research Scholar. But the associate professor didn't arrive home empty handed.

It wasn't the result of a spree in the duty-free shop that proved difficult to pack in his hand luggage. Rather, it was the impressive silver trophy representing the prestigious Distinguished Alumnus award he received at the University of Cincinnati's graduation ceremony after addressing their convocation.

Larey was resident at the University's College-Conservatory of Music where he worked with pianist Frank Weinstock, whom he cites as his most important mentor. He also travelled to work with Claude Frank (in New York) and the renowned Andre Watts (in Chicago), both of whom are celebrated concert pianists and teachers. Larey presented to them works by Brahms and Prokofiev, some of which will be released on CD later this year.

He performed at the Kennedy Centre in Washington DC in April and later at the University of La Verne's International Festival in Los Angeles where he took part in a panel discussion and lectured on Arts and Culture in Post-Apartheid South Africa.

But the highlight of his visit was undoubtedly the Distinguished Alumnus award in recognition of his work in South Africa and in the US.

"I was deeply moved and honoured to have received this wonderful award from a prestigious music school," he commented. "I am also grateful for the many opportunities, the excellent guidance and the inspirations I found at the College-Conservatory of Music, from the day I arrived there in 1986."