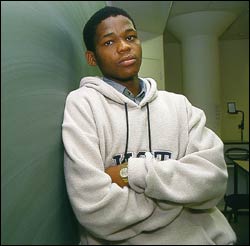 Eezy-peezy: Diffidence led Siyabonga Nzimande to the BCom ADP programme, but the student soon discovered that extra support was unnecessary, and has completed his degree in the regulation three years.

For much of the past three years, Siyabonga Nzimande has been playing catch-up with his BCom in chartered accounting - not because he's been struggling to keep up with the rest of the class, but simply because he put himself on the back foot when he first registered for the degree in 2000.

Fresh from Gugulesizwe High School in Emahlongwa in Durban, Nzimande arrived at UCT primed for his studies, his marks easily earning him a place in the conventional three-year stream. Overwhelmed by the occasion, he decided (out of diffidence and confusion) instead to settle for a place in the Faculty of Commerce's academic development programme (ADP), which would allow him extra support and an additional year in which to finish his studies.

He soon realised that things in the ADP were a little bit too sluggish for him, however. "I got seriously bored with the pace," he recalled.

He applied for a place in the regular stream, and joined the rest of the three-year programme halfway through 2000. But hurdling from the ADP to the regular programme in the middle of the academic year did put him at a distinct disadvantage, as he did so with only half the credits he required at that stage.

"I was very behind, so I had to take up a few extra courses and some summer terms," he said. The story would be much the same for the next two years, as he continued to spend many of his summer days in class.

In December 2002, however, he finished his last summer term, and his degree.

Now already midway through a postgraduate diploma in accounting, Nzimande will this week collect the paperwork for his BCom. And he's already working on his middish- to long-term plans - finish the diploma at the end of 2003, articles and professional exams over the following three years, and then work for ESKOM for four years in thanks for their "red-carpet" financial support throughout his time at UCT.

But, he admits, it hasn't been all easy going at UCT. "My high school teachers deceived me a little bit when they said that university would be easy. When I came here I thought it was going to be plain cruising all the way.

"But halfway through my second year I realised that no, this wasn't going to be child's play."