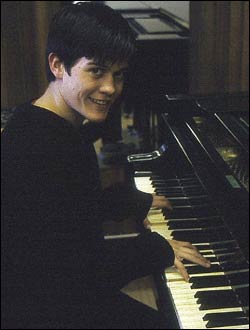 Maestro in the making: The SACM's James Baillieu has won the Rachmaninof piano competition at the Rachmaninof Festival, held at the University of Stellenbosch, as well as the prize for best performance of an Etude Tableaux at the same competition.

When 12 year-old James Baillieu first sat down at the piano, the great musicians, composers and concert halls were probably far from his thoughts. Propelled in the direction of the keyboard by his occupational therapist, the third year South African College of Music (SACM) student was merely trying to improve his eye-hand co-ordination. The therapist may never know what her advice unleashed.

The piano is not the only instrument he plays. He is also an accomplished clarinettist, though the dilemma of what to choose has long since been put to rest. The piano rules, as they say in the classics.

His fledgling talents were broadened at St John's College in Johannesburg where Claire Armstrong ("a fantastic teacher") took the promising pianist under her wing. Then the accolades began to roll in, fast. In grade 11 he won the Standard Bank trophy for the most promising pianist as well as the Ruth Shenker trophy for the Best Recital at the Festival for the Advancement of Music. In 2000, while in grade 12, he was awarded the Associateship Diploma of Trinity College London examinations (ATCL) for the solo pianist performance and piano accompanying categories. In October that year, Baillieu performed a solo piano recital, which received critical acclaim in the press. He was on his way.

The following year saw Baillieu commence his studies at Trinity College of Music in London where he completed an Individualised Programme Study (IPS) and studied piano with Kaoru Bingham and accompanying with Christine Croshaw. In London he participated in master classes with Martino Tirimo, Philip Fowke, Elana Riu and other big names, becoming an active accompanist and recitalist.

Back in South Africa, Baillieu soon established himself as "someone to watch", achieving the country's highest marks in his examining section of the Licentiates from Trinity College exams for piano and clarinet. Last year he won the contrapuntal prize for pianists as well as the Laura Searle piano concerto competition, which entitled him to play the Mendelssohn Concerto in G Minor with the UCT Symphony Orchestra, earning him a standing ovation. This year he was one of 16 pianists that competed in the UNISA national piano competition in Pretoria, as well as 3rd prize winner of the national Gladwell music scholarship competition.

The accolades require hard work; Baillieu spends 12 hours a day at the College. "He's just blossomed," said the SACM's Gillian Lindner. Certainly, under the tutelage of SACM's Graham Fitch, Baillieu has become a sought-after performer for the SACM's concerts and is in great demand as an accompanist. "Graham is a world-class teacher," Baillieu confirmed. "He's refined my technique and my playing has really improved."

There is plenty of travel in his future, with destinations like the United States and a trip to San JosÃ© in California where he will perform in a piano competition of Russian music in 2004.