Scientist looks for brains with brains on their minds 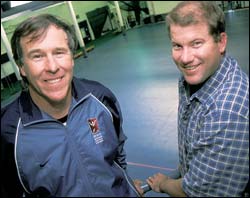 Brain work: Assoc Prof Alan St Clair Gibson (right) and Prof Tim Noakes are looking for researchers who want to join them in answering the big questions in neuroscience, and maybe bag a Nobel Prize along the way.

Fresh off a yearlong sojourn in the United States, Associate Professor Alan "Zig" St Clair Gibson has returned to Cape Town with a mission - he wants UCT researchers to be the first to lift the lid on the innermost workings of the brain, and should their work move a Nobel committee to proffer a couple of medallions in appreciation, well, what's right is right.

On a one-year Fogarty International Visiting Fellowship, St Clair Gibson was (until February 2003) stationed at the National Institutes of Health's (NIH) 121-hectare campus in Bethesda, Washington DC, where he rubbed shoulders with Nobel prizewinners and picked up a few new tricks of his trade. More specifically, he familiarised himself with the techniques of repetitive transcranial magnetic stimulation and dynamic EEG (electroencephalogram) analysis.

The former is used to "mess with people's minds", or, more scientifically-put, to alter memory formation and memory storage, explained St Clair Gibson. So, with the correct electromagnetic pulses, subjects can be temporary blinded or can be made to forget how to perform even the most mundane tasks.

The technique provides very profound insights into brain processes, although subjects are, understandably, hard to come by, he observed.

The EEG work also provided useful coding data on how the brain works and how it interacts with the rest of the body.

Now, back at the MRC/UCT Research Unit for Exercise Science and Sports Medicine (ESSM) (despite appeals from the NIH to stay on), St Clair Gibson has set up a number of collaborations with other UCT units and personnel, notably the Department of Biomedical Engineering's Professor Kit Vaughan and Dr Lester John. But with good equipment on stand-by - including a transcranial magnetic stimulator that is being purchased with the assistance of the NIH - and money reasonably easy to source (again the NIH), he is looking for more people to work alongside.

And he has an ambitious game plan ready for them.

"Our four-year aim is to build a big team to work on answering the big questions in neuroscience - how thoughts are coded in the brain, and how the brain forms thoughts," he explained.

"What we need now are innovative ideas and people," he added. "One thing I learnt in the States is you have to work in a team and you need people with different skills."

Having come across a myriad of Nobel laureates at the NIH has also provided further inspiration. "You realise that they're just people too - you've just got to have the ideas and the drive. And we can do that here."

And UCT researchers need not be diffident at all about the nature and quality of work being done here, he added.

"I had a wonderful time in the US and I learnt all these wonderful things, but I've worked out that we're doing really good work at the ESSM - Tim (Professor Tim Noakes] has put together a really good team here."

What the work needs are people with an interest in research on the brain, regardless of their discipline or possible application, said St Clair Gibson.

"We're looking for anyone with a big brain who wants to share a Nobel Prize," he announced with a smile, but not a hint of facetiousness.