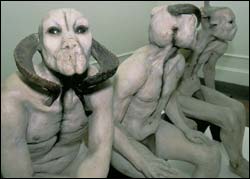 Apparitions and aberrations: Some of the award-winning pieces currently on display as part of Assoc Prof Jane Alexander's exhibition at the National Gallery.

UCT lecturer and sculptor Associate Professor Jane Alexander, winner of the 2002 DaimlerChrysler Award for South African Sculpture, recently opened a solo exhibition at the SA National Gallery of her winning and other works, pieces that have elicited both disquiet and accolades.

Funded by DaimlerChrysler, the show includes Bom Boys, an eerie series of sculptures on street children (masked heads on small corpse-like bodies predominate) for which Alexander won the award. Taking up the first of the three halls over which the exhibition is arrayed, however, is the much-debated and nightmarish Butcher Boys, an assemblage of three muscular but emasculated male human figures with ripped spines and animal heads, a piece Alexander produced in 1985 when still a Masters student at Wits University.

The show's main collection is African Adventure, comprised of sculptures, photomontage and video footage that, according to one National Gallery commentator, were inspired by and comment on the tourist agencies of Long Street where Alexander lived for many years.

While critics grapple with the meaning of Alexander's works (notably the "malevolent" and "bestial" Butcher Boys), most agree that they offer provocative comments on South Africa and Africa's past and present. "Those who enter Jane Alexander's imagery and decipher her iconography find themselves deep in the middle of the political and historical problems of the African continent," observed Dr Renate Wiehager, curator of the DaimlerChrysler collection.

Alexander's exhibition will run until July 27.