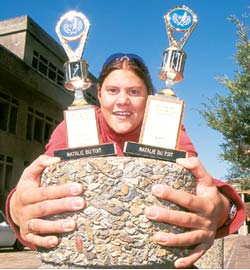 The accolades keep rolling in for Natalie du Toit, who, somewhere between the competitions and the make-up lab sessions and her many public speaking engagements, won two major awards from the Western Province Sportswriters' Association (WPSA).

The group named Du Toit as their Sports Star of the Year in both the women and disabled women categories at a mid-April banquet, hosted by Western Cape premier Marthinus van Schalkwyk at his Leeuwendal residence.

Du Toit was in Bloemfontein at the time, however, but had her manager pick up the trophies and tender her thanks.

And after having found suitable spots for the silverware in her room, Du Toit is now turning her attention to her BSc studies, having missed all of 20 days last semester.

She is, however, keeping a wary eye on her laden post-exam itinerary.

Apart from a series of international galas in France and Spain, she will also be putting in an appearance as a special guest at the glitzy Laureus World Sports Awards in Monte Carlo on May 19 and 20.

Du Toit will head for Monaco, where she will be sharing a red carpet with a procession of international sports and show business celebrities, the day after her final examination paper (on biology).