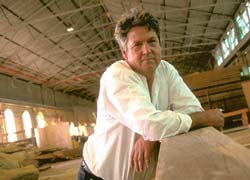 The starting block: Prof Gavin Younge at work on the pieces that will adorn new the Cape Town International Convention Centre.

Professor Gavin Younge of the Michaelis School of Fine Art has won the commission to produce two original pieces of work for the new Cape Town International Convention Centre (Convenco). Convenco recently gave Younge's two-part submission, Reservoir, the nod in the second phase of an artwork competition for pieces that will grace crucial spots in the Centre, due to open towards the end of June. The commission is worth R500 000.

According to Convenco CEO, Ian Douglas, the Centre envisaged the second phase work as a two-part suspended sculptural installation forming focal points at each end of the building. One piece will be positioned at the Heerengracht end and the other at the main auditorium at the V&A Waterfront end.

The first phase of the competition comprised a wall relief for the Centre's main entrance foyer. UCT alumnus and honorary doctorate recipient, Dr Revel Fox, who was a member of the adjudication panel, said that the two suspended works had to be visually linked, and that submissions had to interact, both with each other and with the architecture of the building. "The Reservoir submission by Gavin achieves both these linkages in a meaningful and dynamic way," he said.

According to Convenco, Reservoir relates to the visual and audio senses of people visiting the Convention Centre. The first piece comprises forms woven out of wire and metal strapping to resemble storage vessels.

These will be suspended at the Heerengracht end of the building, with Table Mountain providing additional visual interaction. The sculpture includes an aural dimension as individual life histories of Capetonians are heard through loudspeakers within the suspended artwork and are visually displayed on a liquid crystal display.

The second piece comprises woven wooden boat hulls. The stories from this piece will incorporate life histories of people throughout the rest of South Africa, Africa and the world, to emphasise the building's purpose as a convention centre; a meeting place of people for the purpose of dialogue.

This piece will hang outside the main auditorium, at the V&A Waterfront end of the building. Regarding his submission, Younge noted that he had been guided by the power of storytelling and oral histories in both understanding the past and in interpreting current events.

"I wanted to go beyond a 'heroes acre' approach to understanding where we have come from to include an appreciation of overlooked sculptural technologies (weaving, binding - what the Japanese call 'Shime'), and to alloy these with the spoken words of unsung heroes," he said.