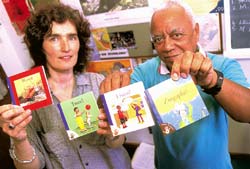 Going Dutch: Carole Bloch and Prof Neville Alexander show off some of the work that PRAESA has begun to produce with the funds recently received from the Royal Netherlands Embassy.

The most recent multi-million rand grant by the Royal Netherlands Embassy to the Project for the Study of Alternative Education in South Africa (PRAESA) could hardly have been better timed. It comes just as the UCT group gears itself for the introduction of a mother tongue-based bilingual education approach in Western Cape schools.

The Embassy, one of PRAESA's most faithful and generous supporters since its inception in 1992, recently announced that it would contribute just under R10-million to the Project's coffers over the next two years. PRAESA, affiliated to the Faculty of Humanities, will deploy the funds in its ongoing work around language-in-education policy implementation and the promotion of the three official languages of the Western Cape, explained PRAESA director, Professor Neville Alexander.

This work includes the development of publications and learning support materials, such as the set of eight children's books, geared specifically at preschool and primary school children in the Western Cape, that the Project recently distributed around the Cape Town area. Written in Afrikaans, English and, crucially, in Xhosa, the books form an important part of PRAESA's efforts to foster a culture of reading among children and adults.

According to Carole Bloch, who specialises in early childhood development within PRAESA, the Xhosa versions are a rarity in children's books.

"There are hardly any preschool books written in Xhosa, and so many children, especially those for whom English or Afrikaans is a second or even third language, never have the opportunity to read books written in their mother tongue," she said.

The training of both educators and PRAESA staff is another area of concern for the Project, noted Alexander. Its premier initiative in this field is its postgraduate Training of Trainers course, a one-year programme designed to equip participants who train, monitor, advise, supervise or mentor teachers who work in multilingual classroom settings in the Southern African Development Community (SADC) region.

The focus of the programme is on the introduction of a mother tongue-based bilingual education system in southern Africa, Alexander said. Last year PRAESA hosted the first intake for this course.

Another area that provides much opportunity for research and development is around language planning, he added. This involves regular language mapping, or surveys of language profiles in the Western Cape.

"In order to plan properly," observed Alexander, "you need reliable and updated data." Always keeping an eye on the relation between language planning and policy development - at provincial and national levels - PRAESA's work received a major impetus when the Western Cape Education Department (WCED) announced last year that it would shortly be introducing a mother tongue-based education system in the province. But this, in part, requires that learners have access to material other than textbooks that they can turn to for additional reading.

It is here again that PRAESA's drive to foster a culture of reading will come into play, observed Alexander. Publishers, he added, are hesitant to produce books in any significant numbers unless they are sure there's a market for these.

"They have to have confidence that some sort of reading culture exists."

It is in appreciation of the group's work in this and other regards that the Royal Netherlands Embassy has again dug deep into its pockets to support PRAESA, Alexander said of the recent donation. "It's a testimony of their confidence in PRAESA, and a reinforcement of what we're trying to do in this country."