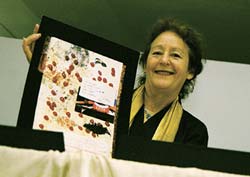 Celebrating the past: Fine Art Masters student, Shirley Klein-Kantor, with some of the pieces from her exhibition.

UCT Fine Art masters student, Shirley Klein-Kantor is set to fulfil a yearning ambition when her exhibition Memorialising Home: In memory of the departed and dispersed Jews of Calvinia is exhibited in her hometown of Calvinia.

The installation, which was featured at the Michaelis School of Fine Art last year, will be exhibited at the Calvinia Museum, formerly a Jewish synagogue, later on this year.

Klein-Kantor's installation, which tackles themes of personal identity and family history and the dispersal of South African Jewry, will be the first of its kind in the Karoo town of Calvinia.

According to Klein-Kantor, the exhibition was inspired by her family's history, (they came to South Africa at the turn of the 19th century from Lithuania) and their interaction with other communities in Calvinia.

â€œBesides looking at my own experiences of dispersal and separation the installation also deals with the dispersal of South African Jewry,â€ she explained.

The installation features various personal, historical and religious objects which all tie Klein-Kantor's themes together. According to Klein-Kantor, though responses to the exhibition were varied, she had been surprised by people's responses to her family's artefacts.

Included in the installation are household objects and among the other artefacts in the display are religious books, and prayer shawls from the early synagogues, now converted to museums, or worse — demolished.

Klein-Kantor mentioned that many people were deeply moved by the experience of viewing the installation. â€œThe artefacts seemed to resonate with them and their own memories.â€

Klein-Kantor said that the work had given her enormous creative energy and sense satisfaction in fulfilling her obligation to her past and that other people had been able to share in this memorialisation.