Class of 53 together again 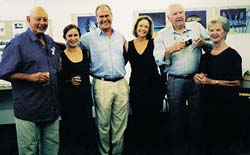 Together again: These members of the architecture class of 1953 were part of the recent reunion gathering at the Centlivres Building, (from left) Basil Clark-Brown, Joan Seirlis, Mike Boltman, Bernadine Boltman, Ray Butcher (from Zimbabwe) and Shirley Pitman.

TRACKING down people who were fellow students 50 years ago proved to be quite a challenge for the organisers of the School of Architecture's 1953 reunion.

Enquiries at UCT led to records of exam results in the archives department, and, with the help of the Alumni Relations Office, a healthy 20 responses were finally gathered for the reunion.

One of the organisers, Wilma de Villiers, said two functions were held, a â€œmeet and greetâ€ at the School of Architecture and a dinner at the Alphen Hotel. Of the former venue, De Villiers noted that it was a â€œvery different building from that of our student daysâ€. â€œWe were accommodated in wooden pre-fab buildings on the south side of the rugby fields, on the site that is now a car park.â€

Professor Dave Dewar welcomed the group and brought the alumni up to speed with news from the faculty; the structure of the courses, the students and the University in general. â€œIt has grown to an extent we would not have envisaged 50 years ago,â€ De Villiers commented.

â€œMost of our classmates have retired, but some are still practising or devoting their time to other interests,â€ she continued. â€œWith the exceptions of one from Zimbabwe, one from Canada and one from London, all currently live in South Africa.

"During the course of the dinner, we had a call from a former classmate, Andrew Gunde, in Germany, saying he was with us in thought.â€